Is There Mould Under My Flooring? 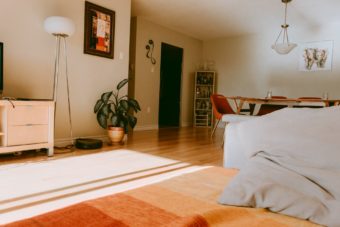 The age-old flooring material makes for a warm underfoot and brings the aesthetics of nature into your home.

Beneath the beauty and splendour, hardwood floors require proper care to increase their lifespan and reduce susceptibility to moisture.

Too much water and moisture cause the wood to rot and encourages a mould infestation, which is detrimental to your floor and health as well.

But how do I know if there’s mould under your flooring?

Here are a few signs that your home could be harbouring deadly mould.

3 Signs of Mould Under the Flooring

For the most part, the sight of ghastly mould patches is the best way to confirm its presence. However, mould thrives in the dark, warm, and moist recessed areas of your home, such as under the floorboards. In such instances, these signs can help you confirm the presence of mould under the flooring.

If you encounter a strange pungent, musty, earthy smell in certain parts of the house, you might have a mould infestation.

The scent is reminiscent of decaying organic matter, hence unpleasant to your nose. Close examining the floor area with the strongest musty smell can reveal another sign of a mould infestation.

Discoloured, distorted, and warped floorboards are a strong indicator that you have a mould problem. Mould often appears as discoloration, staining, or a fuzzy coloured growth on wooden floorboards.

In most cases, a mould infestation follows a simple flooding incident in the house. It could be a leaking sink, a backing toilet, or an overflowing tub. Depending on the level of infestation, a mould presence might be accompanied by damaged floorboards.

If you notice a discoloured or water damaged section of your flooring, you should peak under those floorboards. Remove a small section of the floor and check underneath the boards for mould.

Depending on the species, mould can take on different texture and form. Most commons species have a fuzzy, rough, or velvety appearance and can be white, yellow, black, green, or blue. Sometimes it can look like a stain or discolouration on a surface.

Removing Mould from Under Your Hardwood Floor

You need to act quickly once you confirm the presence of a mould infestation under your floorboards. As with any health problem, early intervention is advantageous when dealing with mould.

With early detection, you can quickly swing into action and stem the spread of the fungus to the rest of the house. Removing mould under a wooden floor entails peeling back the damaged floorboards and disposing of them properly.

You may need to order another batch of floorboards to replace the infested ones. While that might seem like overkill, it’s the best way to solve the problem.

Read our article on the types of wood-look flooring

Failing to replace the floorboards increases the chances of a re-infestation as the residual mould gets into other parts of the house. Before you know it, you could be dealing with a large-scale infestation that could endanger your health and wellbeing.

If the infestation only covers a small section of your hardwood floors, you can remove it yourself.

Always wear protective clothing and gloves before removing mould under the flooring.

Use a high-quality respirator or an OSHA-approved particle mask

You can use straight vinegar instead of a borax solution.

Don’t use bleach as mould treatment.

Call a mould remedial expert if you have any health concerns, or the mould infestation is too widespread under the floorboards.

Mould is hazardous to your health, and you should take these safety precautions seriously when removing mould under the flooring.

What about stop worrying about mould under your flooring altogether? There are a number of flooring that are waterproof and less prone to mould growing underneath. View our range of vinyl flooring available for residential use and our commercial-grade vinyl for suited for commercial and health premises.

Find what you’re looking for

The best flooring for high traffic use and why is it commercial vinyl flooring?
EVP vs LVP: What Is It and Where Is It Used?
How to Choose the Right Tiles for Your House
Best Commercial Gym Floorings: Types, Pros and Cons
How Much Does Carpeting Cost?